The days have shortened and the sun is hanging lower and lower, but Fall stubbornly refuses to give way to winter’s snow. As the warm weather hangs on, (warm being relative of course, the fact that it is staying above zero at night warrants a warm spell around here) I find my dog Howie sleeping in random spots around the grounds soaking up the sunshine. I can’t help but smile and think what a rough life for a dog. 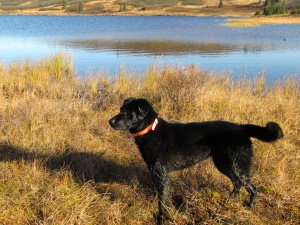 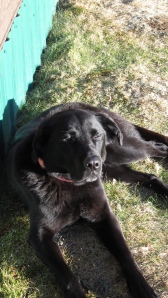 When, we made the decision to move up here, I knew Howie would be in heaven. He has become such a larger than life character here at the lodge, photo bombing and entertaining guests with his tricks. I once heard a saying, “Whoever said diamonds are a girls best friend, never owned a dog” and well, I completely agree. 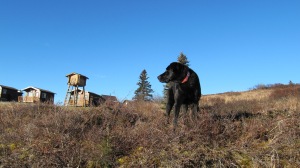 Howie came into our lives after a long search for just the right dog, basically cheap and healthy. I grew up with black labs and Joe grew up with a German Shepherd, so we both got a little of what we wanted with Howie, who is a lab/shepherd mix. When we went to pick out a puppy, he was the last male left, while I was drawn to one of his sisters who was sweet and calm, he was a restless ball of energy, rummaging around the place with the biggest pot belly I had ever seen on a puppy.

From the start, he was full of personality, lovable, restless and way too smart. He inherited the labs love of water and retrieving, and the German Shepherd’s vocal tendancies…. not barking, but vocal grunts and groans. He gives a clear indication of his feelings, while physically obeying, he lets out long groans that let you know he is unhappy about it. The other lab trait that he inherited is a little less pleasing, there is no other way to put it then he is a gluttonous, pig. As a puppy, I once found him splayed, all four legs out, on a pile of dog food eating, (he had ripped open the bag). Another time, he ate every single dandelion out of our yard, which at first was exciting, then he threw them all up in a disgusting pile. He occasionally sneaks into the compost pile, but he always tells on himself immediately. I look at him and he melts and slinks to his dog house, and I know he is ashamed of himself. Howie also tries to trick Joe or I into feeding him a second breakfast. Our rule is whoever heads out to the outhouse first feeds Howie breakfast, but he will try and trick the next person out by going and sitting by the shed door as if he hasnt been fed… sometimes stooping as low as to bring us his dish. Luckily, we are onto his scam, but it doesn’t  stop him from trying. Frankly, not once in his five years have we ever forgotten to feed him, he would never let that happen. 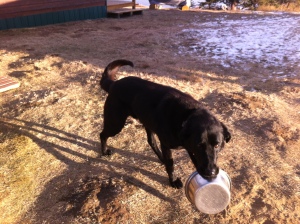 In October, Howie turned five years old, sometimes I think he will never grow up or slow down. His energy is endless, even as a puppy we taught him to run on a treadmill because we could never wear him down. On hikes he is always ready to go further, he will play fetch until he falls over (literally), runs along side when we bike, and will catch anything you throw at him for as long as you want. He has never been one to wander or run away, he loves spending time with us and there is no such thing as “personal space” when he is around. When, I am sitting up on “Bear Point” glassing for animals, he tries to get as much of himself touching me as possible, at times getting tangled in the straps from my binoculars. He shamelessly uses me to block the wind for him, but I let him since his black coat provides an extra bit of warmth.

Owning a dog like Howie has been a lot of work, but his unconditional love has rewarded us a thousand times over. I am greeted with excitement everytime I walk out the door. He is convinced that something wonderful is about to happen, even when all I do is walk to the outhouse. He is gentle and kind, loves everyone, and never tires of hugs and affection. Howie is quirky and his antics fill us with laughter. Life in the bush, at times, can be harsh and cold, tiring and mundane, but Howie’s constant enthusiasim reminds me life is an adventure and you never know what lies around the corner.

On days, when it is quiet and lonliness starts to creep in he slips his nose into my hand as I walk or rests his head on my shoulder and the world is a warmer place. Some may prefer the cold, brilliant sparkle of diamonds, but as for me I prefer the warmth of my dog’s copper eyes.